Skip to content
HomeGuest BlogAre You a Christian, or follower of Jesus?

Here is an interesting article on following Jesus from Scott Camp…

“So, I have a question for you. Are you a Christian, or are you a follower of Jesus?

Odd question, huh? When we tell others we’re a Christian, we know what we mean, but do they know? In a recent article in the Christian and Missionary Alliance magazine, a missionary to the Muslims had the following thoughts about evangelizing Arabs.

What about us? We’re not missionaries to Muslims, we live in Red Bluff! Well, think about it; when you talk to a stranger or an unbelieving acquaintance and you feel led to tell them about Jesus “I’m a Christian,” what do you think their filters, their pre-conceived notions are?

Think about it. Survey after survey says most American unbelievers think these things about Christians: “Christians are anti-gay, anti-women, and intolerant of people that aren’t like them.” Think about this for a moment. Here’s what the missionary to the Muslims figured out. “Christian” is not a particularly important biblical term. It shows up in the New Testament only three times: in Acts 11:26, Acts 26:28, and 1 Peter 4:16. That’s it, three times in the entire New Testament. However, “disciples” shows up almost 300 times, in the Gospels, we’re told to “follow” Jesus 30 times.

So, the missionary decided to tell Muslims he was a “disciple…a follower of Jesus.” What happened? The barriers to engagement were lowered. But as the missionary prayed and thought about this dilemma, he realized that the way he and other Christians see themselves has huge importance in many areas. When he thought of himself as a Christian, he realized that this led him to believe he needed more; more knowledge, more prayer, more of “read the Bible, learn more about your faith.” However, when he thought of himself as a “disciple, a follower of Jesus,” he thought differently. He found himself needing to grow more in humility and obedience. He realized that often happens outside the church, engaging outside the church.

He ran into a second problem in his “figuring this out.” When he thought of himself as a Christian, he saw himself as a “finished product.” “I’ve prayed the prayer; I’ve been baptized; I’m part of a group.” As a “follower of Jesus, a disciple,” different questions came up. “Where will my master lead me today? Who will we meet?”

How we see ourselves also frames how we talk to those who are not following Jesus. If I’m a “Christian,” I’m inviting others to my religion. I argue for the virtues of my faith. I’m trying to make a convert. It’s too easy to get involved in cultural or political battles such as abortion, homosexuality, and the role of women in the world.

When I preached these thoughts at three different churches here in Red Bluff, my text was Matthew 26:58, about Peter after the arrest of Jesus. “But Peter was following Him at a distance…” You see, there’s a difference between having Jesus solely as “Savior” and having Him also as “Lord.” Too many “Christians” are “following at a distance.” They’re unengaged.

What did the early church believe and teach? Look at the preaching history of the church in Acts. “Savior” is there twice and “Lord” is there 106 times! What conclusions do you draw from this? What about you? Are you relying on Jesus as “Savior” and rejecting Him as “Lord?” It’s too easy to “follow at a distance.”

Are you a Christian, or are you a follower of Jesus?” 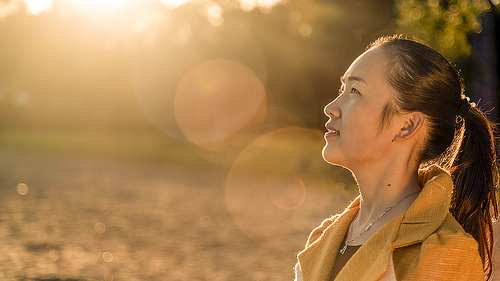