Skip to content
HomeDaily WordAikido and the Great Turnaround

I love martial arts and have practiced many disciplines and forms over the years. One of the most interesting ones that I have seen but never tried is Aikido. You might know this the martial art made famous by Steven Segal. But it was a Japanese martial art created by Morihei Ueshiba. The basic premise of the form is to understand the rhythm and intent of the attacker in order to find the optimal position and timing to apply a counter-technique. One of the pillars of Aikido involves called “irimi” which involves entering deeply around or behind an attack to defuse or neutralize the attack. To do this, the idea is to blend with or enter into an opponent’s attack to become one with the opponent’s movement and leaving them with nowhere to strike. Then to complete the movement, one moves out of the opponent’s line of attack to the opponent’s shikaku, or blind spot. When executed properly, one can strike an opponent with great force by leveraging the attackers momentum and forward movement. 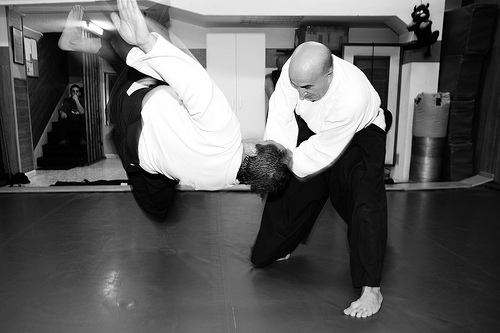 Scripture:
“Those who had been scattered preached the word wherever they went.” – Acts 8:4

Observation/Application:
Today’s scripture reminds me of Aikido. The bible says that what the enemy meant for harm, God will use for His glory. This comes from the scriptures surrounding the death of Joseph’s father Jacob, and the brothers are worried that the brother that he is going to harm them because they were going to kill him but sold him into slavery instead. But we learn that Joseph rises to the highest power possible under Pharaoh, and in (Gen 50:20) Joseph tells them, “You intended to harm me, but God intended it all for good. He brought me to this position so I could save the lives of many people.”

Similarly in the book of Acts, “Saul began to destroy the church. Going from house to house, he dragged off both men and women and put them in prison.” And everyone scattered because Saul was putting people in jail and killing them. But as they were scattered, they shared the word about Jesus, and many were saved. See they were probably content staying together, hanging out with their Christian friends, worshipping together, and sharing the news about Jesus. But God had other plans. He needed everyone to go and share the news across the earth. So in comes the bad guy Saul. He came in with bad intentions to wipe out these Christians. But God used this for good and the word was brought to many towns, and thousands were saved, and this started to spread the message, the fire across the land. Because Philip went to Samaria, he saved the whole town including Simon the town sorcerer.

Prayer:
Dear heavenly Father, thank you for your Word! We know that what the enemy intends for harm, you will use for good. Take our problems, our fears, our pain, our sickness, our impure thoughts, everything that is not pure and holy, and pivot what appears to be overwhelming us in the flesh, and use it for your good. We believe, and receive that you will deliver these things from us, and we will be blessed with all of your goodness and mercy, and be filled with peace, health, hope, forgiveness, joy, and love. We give all honor and glory to you Lord, and we receive this in Jesus mighty name. Amen.