Skip to content
HomeDaily WordCrazy or Genius – Knowing The Truth

Aristotle once said, “no great mind has ever existed without a touch of madness. Many of the world changers, people of true influence in this world, were thought insane at the time. Albert Einstein for example was an absolute genius when it came to modern physics, but he never wore socks and married his cousin. Vincent van Gogh cut off his hear, Michelangelo was opposed to bathing, and Freud had a fetish for the sex life of eels. And there are many examples in the Bible, none greater than Noah who certainly had his sanity questioned as he spent years building this ark, but the world ultimately learned that he had wisdom far greater than all of mankind. The may have been thought these people insane, but the world eventually learned of their genius. 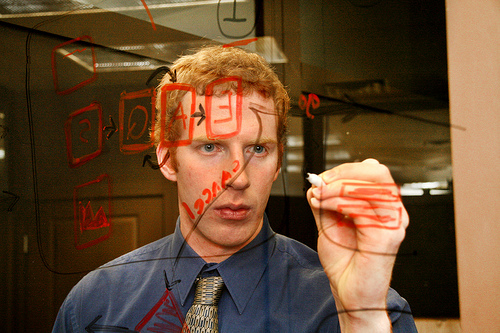 Scripture:
“‘I am not insane, most excellent Festus,’ Paul replied. ‘What I am saying is true and reasonable’.” – Acts 26:25

Observation/Application:
Paul was so saturated in the Word, and in the Spirit, by being obedient to God’s call in his life, that others thought him insane. In Acts 26 we read the story of Paul standing before king Agrippa and Festus, and the Jews who were trying to get him killed. Paul proceeds to speak in his defense, and delivers his solid defense in such a way that he really shakes things up. In verse 24 we read where king Agrippa interrupts Paul’s defense and says “You are out of your mind, Paul!” He shouted. “Your great learning is driving you insane”.

At this point I can only imagine that Paul reads the room and figures the best defense is a good offense and goes right for the jugular, and tries to convert king Agrippa to Christianity. In verse 27 Paul says, “King Agrippa, do you believe the prophets? I know you do.” How is Paul so effective in speech?

First and foremost, Paul has a clear vision and purpose. He is locked on the Promise. He is locked in the truth of Jesus Christ. Nothing anyone was going to say was going to convince him otherwise. His vision, and his mission was to share the Word and Truth with everyone. Even when he stood before kings and rulers, he was still more concerned and focused on his vision/mission/purpose/calling that he continued even in those circumstances. He was living his purpose.

It almost seems like he is having fun at this point when he says, “I know you do.” What I really think is that he was convinced and passionate to the point where he was genuinely going for conversion of king Agrippa. In sports we call this being “in the zone.” That’s when everything is flowing and you are operating at peak performance. How do we get in the zone? What does this mean in spiritual terms? We are in the zone spiritually when we are walking in the Spirit. With the power of the Holy Spirit all things are possible, and I’m not talking about winning a tennis match here, or a golf tournament. I’m talking about moving mountains.

When we walk in the truth of God our Father and our Lord Jesus Christ, we have access to healing. And I’m talking full healing and restoration – mental, physical, emotional, and spiritual. “Why do you stare at us as if by our own power or godliness we had made this man walk?” – (Acts 3:12–13). When people are healed, it is by the power of our Creator. That’s why it is important to pray in Jesus’s name. And when God heals someone, it is for the common good of the church and as a witness to the world. We see marriage restoration, relationship and family restoration, financial increase, blessed lives beyond our comprehension. There is no limit to what God can do! As it is written,

You see, Paul was saturated in the Word, and led by the Spirit. Nothing was going to stop him, not even trial after trial where they were trying to kill him. And we think we have problems? Paul stood trial multiple times for his very own life! Yet he walked among the nonbelievers, and spoke confidently, reasonably, and in truth.

My favorite part of this chapter is in verse 29 is where Paul says, “Short time or long – I pray to God that not only you but all who are listening to me today may become what I am, except for these chains.” Paul never wavered on his mission to share the good news of Jesus Christ. He was so bold, and so confident.

Easy when you are walking in the Truth, and the Light, and in The Way!

Prayer:
Dear heavenly Father, thank you for this Word today. May today’s Word reach deep into our hearts and minds. Help us to walk in your Word, in your truth, in your light. Embolden us with the power of th Holy Spirit. Help us to be all things to all people, that your Word will be used according to Your riches in glory. We give all honor and glory to You Lord, in Jesus mighty name. Amen.